Apart from snow, there’s another obvious way to figure out winter has settled in: everything around start freezing. And believe it or not, your car might freeze too and refuse to start in a cold December morning. Most of the time, the issue resides in improperly maintained engine fluids. Using proper engine oil and antifreeze goes a long way in keeping your car ready to go on winter days. Here’s a more detailed approach on the subject.

As you probably know by now, engines use oil to lubricate internal components in motion, reducing friction and allowing for extended usage accompanied by minimum wear. The main characteristic of engine oil is viscosity. There are two SAE values for viscosity encapsulated on all oil containers. Usually, the markings are XWXX, where X is replaced by a particular number.

Let’s take for example a 5W10 oil. The first number (5) represents the cold viscosity of the oil at zero degrees Celsius in the SAE system. The lower the value, the less viscous the oil is. However, as the oil heats up due to the heat radiated by the engine, such a low viscosity would not provide proper lubrication and generate wear. This is why, when heat up to a temperature similar to the one of the engine, the oil switches to a higher SAE viscosity, in this case 40.

So, what has all this to do with winter? Quite a lot, actually. As temperatures drop, using an engine oil with a rather high SAE viscosity value at 0 degrees may cause the engine to crank slowly or not crank at all. Check your car’s owner manual for the right oil viscosity values to be used during winter driving.

Keep in mind that old oil will lose lubrication properties and may become more viscous than its original SAE value. Given this, it’s a good idea to change your car’s engine oil and oil filter before winter sets in. 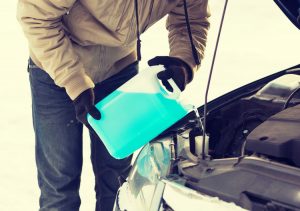 Your car relies on coolant to keep engine temperature at a steady value where it provides maximum yield. On the other hand, as winter sets in, very low temperatures may cause coolant to freeze within the piping and the radiator. If this happens, your car’s cooling pump will be overloaded and eventually fail resulting in a costly replacement.

Antifreeze fluid alters the freezing and boiling point of your engine coolant, allowing it to remain in a liquid state even below freezing temperature of water. Depending on the area you live in, you may require a higher antifreeze concentration in the coolant (Canadians for example may have to use 100% antifreeze). Check with your local car shop to figure out the proper antifreeze concentration as a function of mean winter temperatures in your area.

Apart from oil and antifreeze, windshield washing fluid plays a vital role in allowing your car to run in winter conditions. Unlike summer washer, the fluid used to clean your windshield during the winter acts as antifreeze so it won’t lock the washing installation, but also provides defrosting capabilities. If you can’t keep your car inside a garage during winter nights, the windshield will eventually freeze making it impossible to see through. Proper washing fluid will remove the ice and allow wipers to move it away from sight.

As you can see, taking care of your car’s fluids will take you one step further in making sure your 4-wheeled companion will have no trouble taking on snowy roads and cold temperatures.